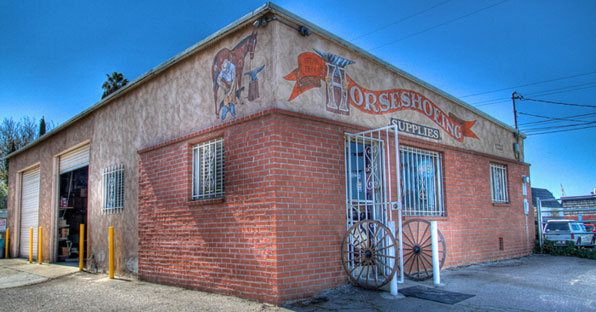 Bryan Horseshoeing Supply (BHS) is located in Lakeside, the eastern porton of San Diego County, and has been a family run business for more than 30 years. No story of the shop would be complete without a brief history of the business.

Newman and Verna Lee Gist ran the original shoeing supply out of their garage in Spring Valley. Newman opened in the morning and shod horses in the afternoon — thus beginning our rather unusual business hours of closing at noon. Verna Lee sold the business in the late 1970’s to Denny Bryan. Denny had been shoeing on the Trotter and Pacer’s Track, but decided to let that part of his life go and give being a “home-body” a try. Denny was a very accomplished blacksmith and shoer and thought it would be a nice mix… the shoeing supply in the morning and shoeing in the afternoon. But, the lure of the track was calling, and Denny wanted to give it one more run…
Side note — Guy, Newman and Verna’s son is still a long time shoer and customer of ours!

In 1982 Denny’s parents, Stan and Janis Bryan, took over the shop to let Denny have one more whirl at the Race Tracks. Stan and Janis didn’t know a thing about shoeing horses but they were quite a team when it came to running a business. With Stan’s business sense and Janis’s bookkeeping they built up a profitable business. In doing so, they realized that help was needed, and Denny came back to work at the shop and soon they engaged the help of their daughter-in law, Vicky ( married to their son Wayne) . 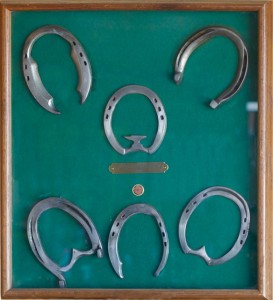 Denny took over the shop in 2004 when both parents had passed. He and Vicky ran it until 2011. When Denny knew his time was drawing to an end, a decision was made to turn the reins over to his brother Wayne and Vicky.

Wayne has made a successful business of shoeing horses in the backcountry for over 35 years. He still remains doing so, but does get into the shop about once a week to stay abreast of the constanly changing inventory.

Vicky is there almost everyday and has made it her goal to have everything a farrier would need and a few items they don’t realize they need. BHS wants everyone that walks through their doors to feel welcomed. In this day and age where so much “personal contact” has been lost due to the internet, social networking, mail orders and deliveries she strives to maintain that one-on-one relationship with her valued customers. BHS recognizes that they serve some of the best in the business and continually strive to help them maintain that status.

Recently, a new member has been added to the team. She is Dannette Harmeson, married to Jason Harmeson — another respected, accomplished horseshoer. Dannette’s knowledge of the trade and involvement with the local San Diego County Farriers Association will make for a nice blend at BHS.